Vancouver, British Columbia--(Newsfile Corp. - April 2, 2019) - Thunderstruck Resources Ltd. (TSXV: AWE) (OTCQB: THURF) (The "Company") is pleased to announce that the first focused geophysical surveys ever conducted on its exploration projects in Fiji have confirmed high-priority drill targets beneath extensive surface geochemical anomalies. The coincident chargeability high and resistivity anomalies, together with the widespread surface mineralization, in this geological setting and with extensive hydrothermal alteration, are characteristic of large gold-copper mineralizing systems and related epithermal veins.

"These results show that our Rama copper-gold porphyry target geophysical anomaly extends to a depth of at least 500 meters, far deeper than Anglo's discovery hole in 1975, which ended in mineralization at 244 meters," stated Bryce Bradley, Thunderstruck President and CEO. "A drilling program will determine the ultimate size of this exciting target."

"The results from our Liwa gold prospect also indicate that geophysical anomalies associated with wide-spread surface mineralization extend to a depth of at least 300 meters below each of our four gold targets, where prior sampling and trenching showed locally high grade gold mineralization at surface," she noted. "With this confirmation of depth potential, we are now ready to determine specific drill targets for each of our identified gold prospects. It's important to note that, in all cases, the anomalies are open to depth beyond the limits of the geophysical surveys."

At Rama Creek a series of four survey lines, each 1.5 km in length, targeted what the Company interprets as the core of the copper-gold mineralized porphyry system. The results of the survey define an approximately 800 m diameter, bowl-shaped greater-than-40 mV/V chargeability high and resistivity low (conductive) anomaly cored by resistive highly-altered tonalite intrusive rocks at surface. The chargeability anomaly extends from surface to a vertical depth of approximately 500 m below surface; the limit of the geophysical inversion (Figure 1).

The results of the Rama Creek Porphyry IP/Resistivity survey are significant in that inversion results demonstrate the chargeability and resistivity anomalies extend to a depth of a least 500 m. This represents at least 150 m below the limit of historic drilling by Anglo Pacific, which ended in mineralization and is coincident with Thunderstruck's recent soil geochemical surveys. 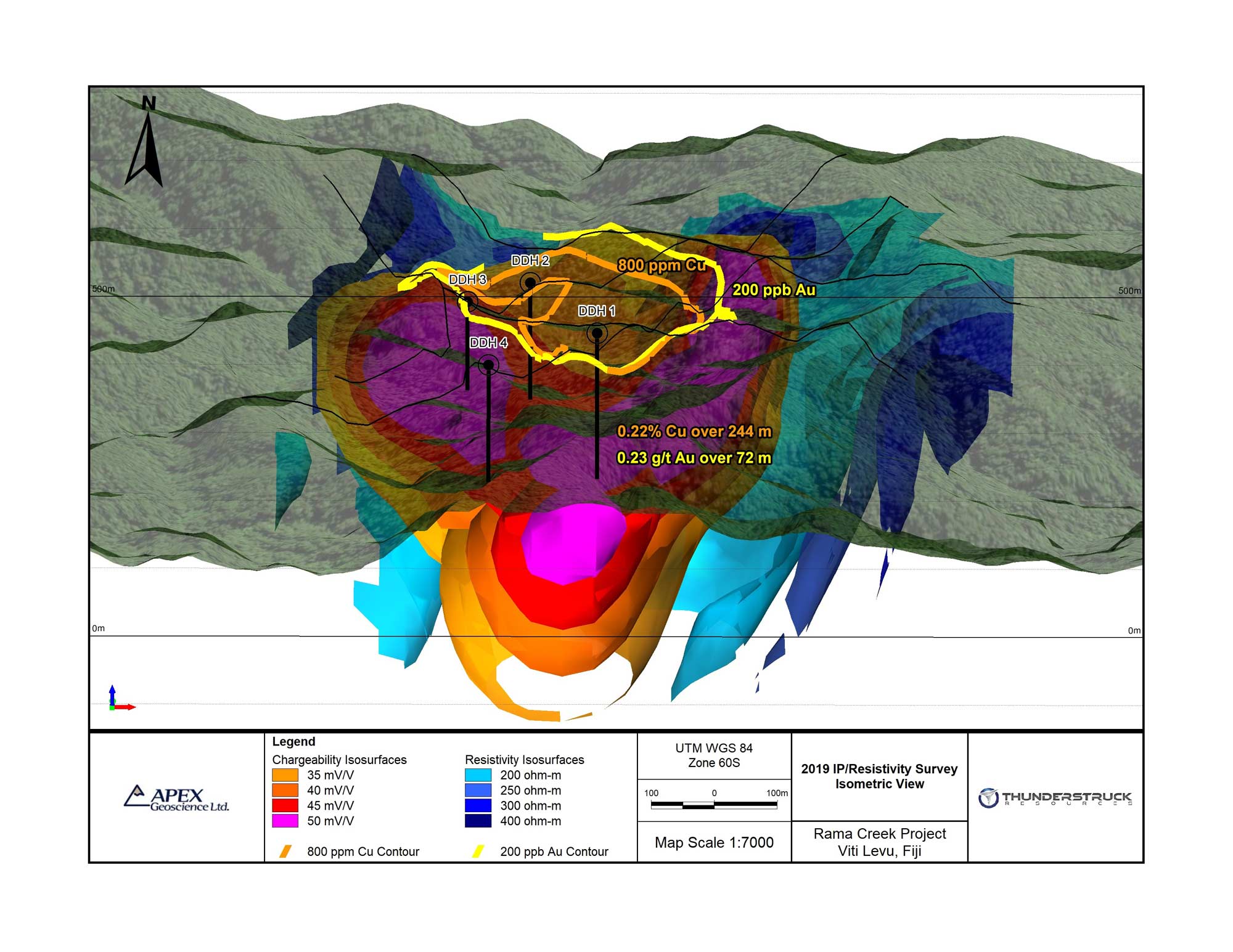 High grade gold bearing plus base metal quartz veins at Jensen's are coincident with an approximately 100 m wide greater than 600 Ωm steeply north dipping resistive, and narrower 60 m wide weak sub-vertical chargeability anomaly extending to a depth a 250 m; the limit of the geophysical inversion (Figure 2).

At the Liwa Ridge, broad gold in soil and rock trench values are coincident with weak near surface chargeability of hematite-silica-pyrite altered volcanic rocks. Significantly, a strong greater-than-600-Ωm restive anomaly occurs beneath the trenched area at a depth of 100 m extending to a depth of 300 m; the limit of the geophysical inversion. Similar near-surface chargeability and a broad greater-than-600-Ωm underlies the untested Lower Vatuvatulevu gold in soil anomaly at a vertical depth of 120 m.

Anomalous gold and silver values in rock float discovered at the Gun Showing area are coincident with a moderate 10 mV/V chargeability anomaly at 100 m depth, and flanking greater-than-600-Ωm resistivity values.

The presence of strong resistive and coincident weak-moderate chargeability anomalies are interpreted to indicate the presence of silicified lithologies and potentially mineralized targets at depth. Importantly, all of the known Liwa Creek Gold Prospect showings produce clearly defined IP/Resistivity anomalies coincident with gold mineralized zones on surface as defined by a combination of ridge-and-spur soil, rock grab and trench geochemical samples. 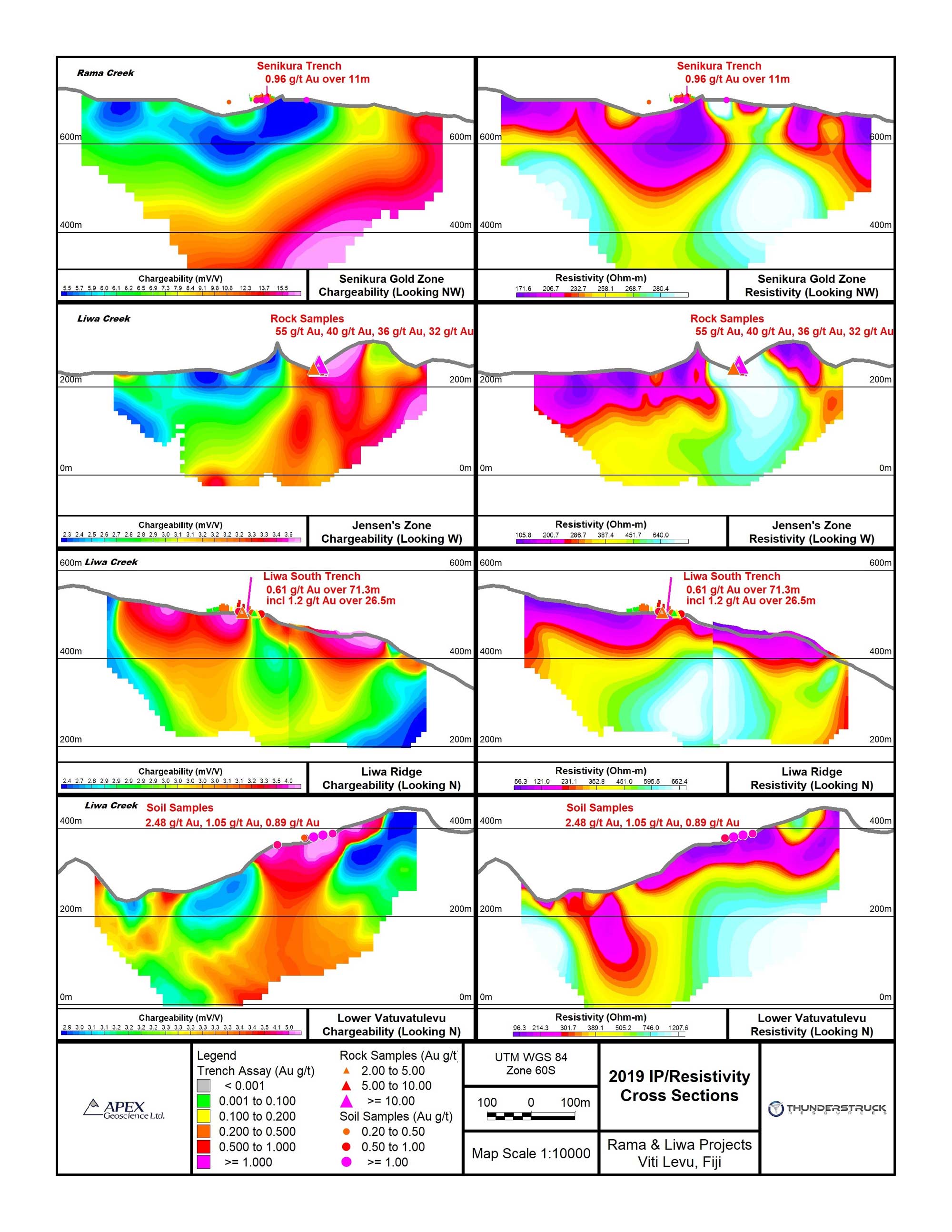 Thunderstruck Resources is a Canadian mineral exploration company that has assembled extensive and highly prospective properties in Fiji on which recent and previous exploration has confirmed zinc, copper and precious metals mineralization. The Liwa Creek gold prospect and Rama Creek copper/gold porphyry are two of the Company's four distinct projects. The Company provides investors with exposure to a diverse portfolio of exploration stage projects with potential for zinc, copper, gold and silver in a politically safe and stable jurisdiction. Thunderstruck trades on the Toronto Venture Exchange (TSX-V) under the symbol "AWE" and United States OTCQB under the symbol "THURF."

Kristopher J. Raffle, P.Geo. (BC) Principal and Consultant of APEX Geoscience Ltd. of Edmonton, AB, is a qualified person for the project as defined by National Instrument NI 43-101. Mr. Raffle has reviewed and approved the portion of the technical content of this news release as it relates to the Rama and Liwa Creek Prospects.

The 2018/2019 IP/Resistivity ground geophysical surveys utilized a pole-dipole array with a 100 m (Rama) and 50 m (Liwa) "a" spacing at "n" separation of 1 to 12. Readings were taken in the time domain using a 2 second on /2 second off alternating square wave. Chargeability values are for the 690-1050 msec interval after shutoff.

To view the source version of this press release, please visit https://www.newsfilecorp.com/release/43839