Vancouver, British Columbia--(Newsfile Corp. - October 22, 2018) -  Thunderstruck Resources Ltd. (TSXV: AWE) (OTCQB: THURF) (The "Company" or "Thunderstruck") is pleased to announce that results of its Q3 field program has significantly increased the size of its Rama Creek copper-gold porphyry prospect. Rama is located on the main island of Fiji, 35 km west of the giant Namosi copper-gold district porphyry deposits, which are at the pre-feasibility phase and operated by a joint venture between Newcrest and Mitsubishi.

Recent field work at Rama included geological mapping, trenching and the collection of 287 samples. The work was focused on the previously discovered Senikura Gold Zone, located southwest of the Rama Creek Porphyry (see News Release March 1, 2018). A large and prospective area to the south is yet to be explored.

"The footprint of our porphyry target has effectively doubled to approximately 1.5 km in diameter," reports Bryce Bradley, President/CEO. "The results of the current program strongly suggest that the Senikura Gold Zone, which was previously interpreted as a separate and distinct gold target south of the porphyry system, is actually part of one large and well-mineralized hydrothermal system. This is a game changer as it demonstrates that Rama has potential to be a major copper-gold system."

Rama is on Thunderstruck's 148-square-kilometre Nakoro concession, which also hosts other highly prospective targets. Rama was explored by Anglo American in the 1970s, before the major pulled out of Fiji. Thunderstruck has since assembled a large property position in Fiji, including the Nakoro and Wainaleka concessions, which encompass copper-gold porphyry and epithermal gold targets, as well as two drill-identified copper-zinc VMS systems.

Building on earlier results, the company has quickly outlined what is shaping up as an important discovery at Rama Creek. The next phase of work will focus on additional geologic mapping and soil geochemical surveys, particularly in the developing Senikura Gold target, and an Induced Polarization (IP) geophysical survey to outline drill targets.

Viti Levu, the main island of Fiji, has a long mining history. It is on the prolific Pacific Ring of Fire, a trend that has produced numerous large deposits, including Porgera, Lihir and Grasberg. Viti Levu hosts Namosi, held by a joint venture between Newcrest and Mitsubishi. Newcrest published Proven and Probable Reserves for Namosi of 1.3 billion tonnes at 0.37% Cu and 0.12 g/t Au (5.2M ounces Au and 4.9M tonnes Cu). Namosi is now undergoing environmental assessment as part of the permitting process. Lion One Metals is now developing its Tuvatu Project, with Indicated Resources of 1.1 million tonnes at 8.17 g/t Au (294,000 ounces Au), and Inferred Resources of 1.3 million tonnes at 10.6 g/t Au (445,000 ounces Au). The Vatukoula Gold Mine has been operating for 80 years, producing in excess of 7 million ounces.

Thunderstruck Resources is a Canadian mineral exploration company that has assembled extensive and highly prospective properties in Fiji on which recent and previous exploration has confirmed VMS, copper and precious metals mineralization. Rama Creek is one of four projects, each of which is being marketed as potential joint venture opportunities. The Company provides investors with exposure to a diverse portfolio of exploration stage projects with potential for zinc, copper, gold and silver in a politically safe and stable jurisdiction. Thunderstruck trades on the Toronto Venture Exchange (TSXV) under the symbol "AWE" and United States OTCQB under the symbol "THURF".

Rob Christl, Investor Relations
Email: This email address is being protected from spambots. You need JavaScript enabled to view it.
P: 778 840-7180
or, visit our website: http://www.thunderstruck.ca 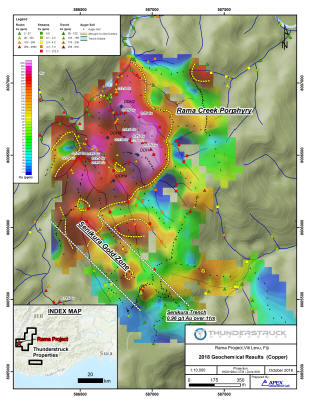 To view an enhanced version of Figure 1, please visit:
https://orders.newsfilecorp.com/files/2901/40525_thunderstruck2.jpg 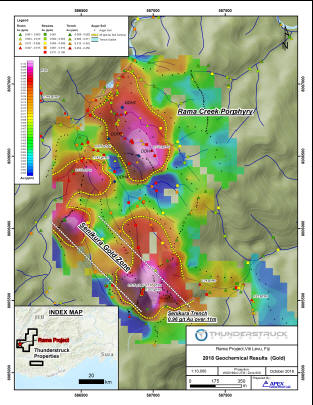 To view an enhanced version of Figure 2, please visit:
https://orders.newsfilecorp.com/files/2901/40525_thunderstruck4.jpg

In conjunction with a previous 228 auger soil samples collected the current results reinforce the apparent northwest trend of the Senikura Gold Zone, which is offset 1 km to the south of the interpreted centre of the Rama Copper-Gold Porphyry target (see the Company's May 17, 2018 news release). Current soil sampling to the northwest and southeast of the Senikura trench resulted in a total of 21 samples returning greater than 50 ppb gold; including 8 samples greater than 100 ppb gold, and up to 0.22 g/t gold in soil expanding the interpreted strike length of the Senikura target to 1 km in length.

A total of 60 rock grab samples were collected as part of detailed evaluation and geologic mapping of the Rama Copper-Gold Porphyry and Senikura Gold Zone targets. Of the 60 rock grab samples collected a total of nine (9) samples returned greater than 0.1 g/t gold or 0.10% copper and are considered anomalous. Three select rock grab samples of highly altered silicified vein breccia exposed in the Senikura trench returned assays of 0.52, 0.30, and 0.18 g/t gold. Within the Rama Creek Porphyry target, a total of 5 samples returned greater than 0.10% copper and up to 0.21% copper. Sampled outcrops comprised intensely silicified, sericite and potassic altered, stockwork textured magnetite-pyrite-chalcopyrite mineralized tonalite intrusive and associated zones of hydrothermal breccia indicative of a high-level porphyry environment.

Based on the results of geological mapping completed by the Company the Rama Creek copper-gold porphyry target exhibits strong northwest-southeast structural control. The copper-gold stockwork veined porphyry zone is separated from the Senikura Gold Zone to the south by wide northwest trending zone of hydrothermal brecciation. The predominance of gold primary mineralization and distal alteration assemblages to the south are interpreted to indicate that the Senikura Gold Zone represents a higher level manifestation of the same magmatic hydrothermal system. The implication being that significant potential for the discovery of additional porphyry mineralization at depth beneath the gold zone exists.

Kristopher J. Raffle, P.Geo. (BC) Principal and Consultant of APEX Geoscience Ltd. of Edmonton, AB, is a qualified person for the project as defined by National Instrument NI 43-101. Mr. Raffle has reviewed and approved the portion of the technical content of this news release as it relates to the Rama Creek and Liwa Creek Prospects.

During 20187 all stream sediment samples were submitted to Australian Laboratory Services Pty. Ltd (ALS) labs Perth for BLEG determination of gold. Auger soil samples were submitted for gold and multi-element geochemical analysis via a 25 gram (g) sample split subject ICP-MS. Prospecting and trench rock samples submitted for 30g gold Fire-Assay analysis and multi-element geochemistry by four-acid ICP-ES. Given the reconnaissance nature of the samples, Thunderstruck has relied on the external QA/QC of ALS which included the insertion of insertion of standard, blank and duplicate samples at a rate of 10% into the sample stream to confirm the accuracy of the reported results.