Korokayiu, originally named Wainaleka, features approximately 15 km of prospective ground along strike, including 8 additional underexplored zones, for zinc-copper volcanic massive sulphide (VMS) deposits (see press release August 19, 2019). Historic and recent drilling efforts, along with extensive surface sampling and geophysical programs confirm the presence of favorable mineralization and stratigraphy within the discovery area and beyond. Exploration is currently underway at Korokayiu in partnership with the Japan Oil, Gas and Metals National Corporation (JOGMEC). The tenement area has recently been increased by 350% to 136 km2.

Exploration over the prospect initially began in the 1970s by Australian Anglo American Ltd. (Anglo) with a drill program, geological mapping and sampling. During their drill campaign Anglo was able to show that a mineralized zone was open along strike at both ends1 and intersected several anomalous values including2:

Mineral exploration was furthered on the Korokayiu prospect by the previous operator through sampling and shallow “backpack” drilling. Surface exploration returned samples with up to 19.9 % zinc and 2.7 % copper, and 14.4 % zinc and 7.1% copper, respectively. “Backpack” drilling returned near surface intersections over 2.2 m of 11.8 % zinc, 1.9% copper and 9 g/t silver from 2.2 to 4.8 m at the west end of the Korokayiu Deposit3.

The Korokayiu prospect is located on the southern part of Fiji’s largest island, Viti Levu, and is approximately 80 km south east of the islands major transportation hub, Nadi . Korokayiu is within Special Prospecting License No. 1416 which, along with landowner agreements, has been renewed for 5 years, the maximum allowed under Fijian exploration policy. 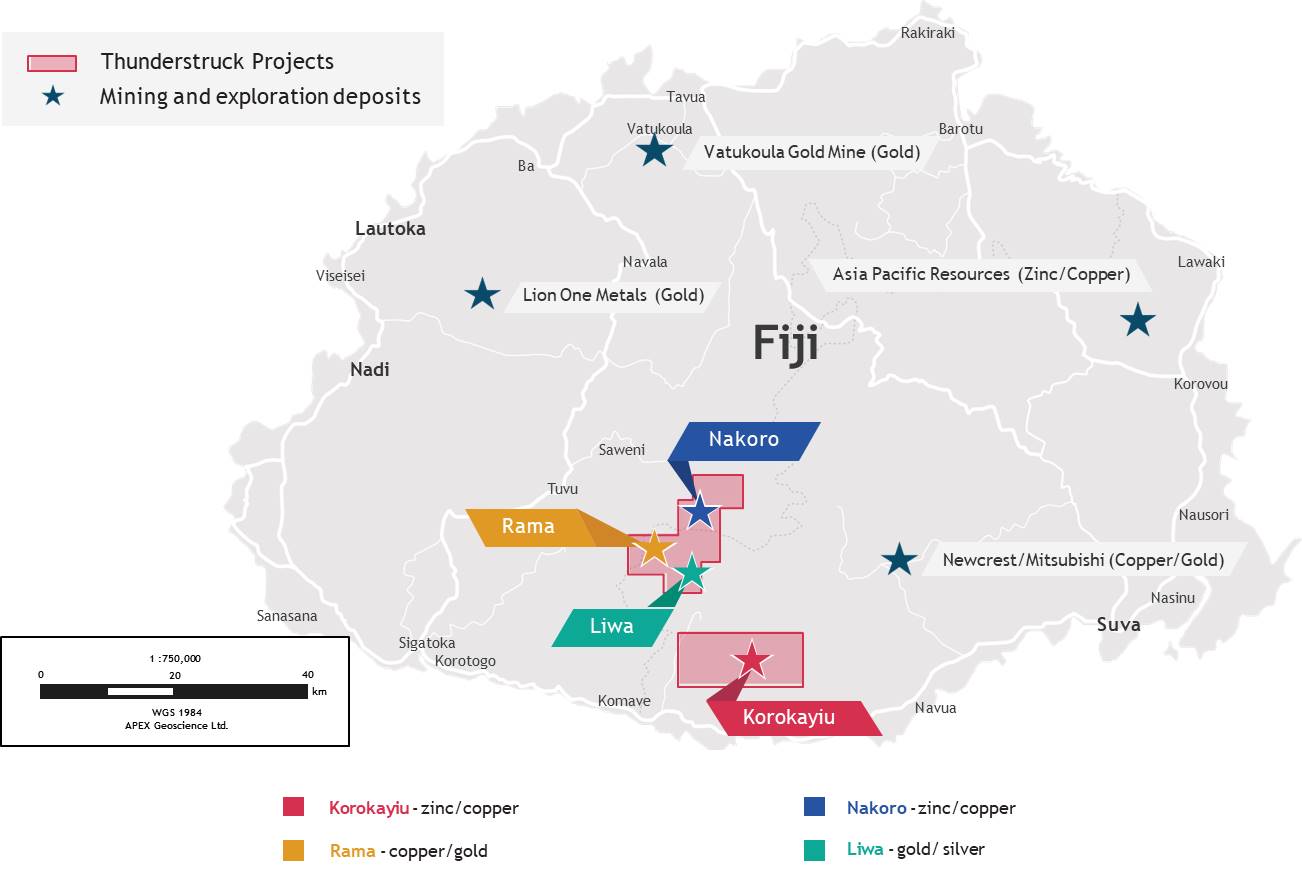 Geologically, Viti Levu has been exposed to a complexity of crustal plate rotations and has been dominated by island arc development followed by rifting, like that of neighboring Pacific Rim countries. Magmatism, precious and base metal emplacement occurred episodically throughout the evolution of the Fijian platform. The oldest known mineral occurrences were emplaced within low-k tholeiitic volcanics of the Wainimala Group, host to the Korokayiu VMS prospect, and proximal to a major intrusive unit: The Colo Plutonic Suite.

VMS mineralization of the Korokayiu prospect is hosted within a fragmental unit that has been subject to extensive hydrothermal alteration. The mineralized unit is underlain by a basement assemblage of intercalated spilitized, tholeiitic basalt and mudstone and contained within a younger suite of basalts, felsic volcanics and associated fragmental rocks. Andesitic units of the younger rocks and the basement assemblage have been intruded by a 6 km long and 1.5 km wide, pervasively altered, subvolcanic to volcanic rhyolite dome complex.

At Korokayiu the base metal sulfides and strong sericite-clay and pyrite alteration are focused at the contact between footwall rhyolites and hanging wall mafic volcanics and basalts. The mineralized lens exhibits mineralogical metal zoning with a top that consists of granular sphalerite in a siliceous matrix, underlain by massive pyrite grading into disseminated chalcopyrite and sphalerite. Below the mineralized lens pyrite stockwork mineralization and low tenor chalcopyrite occurs. The key minerals of interest found at Korokayiu are sphalerite, covellite and chalcopyrite along with tetrahedrite, tennanite, enargite, and chalcocite; typical minerals for a VMS deposit. 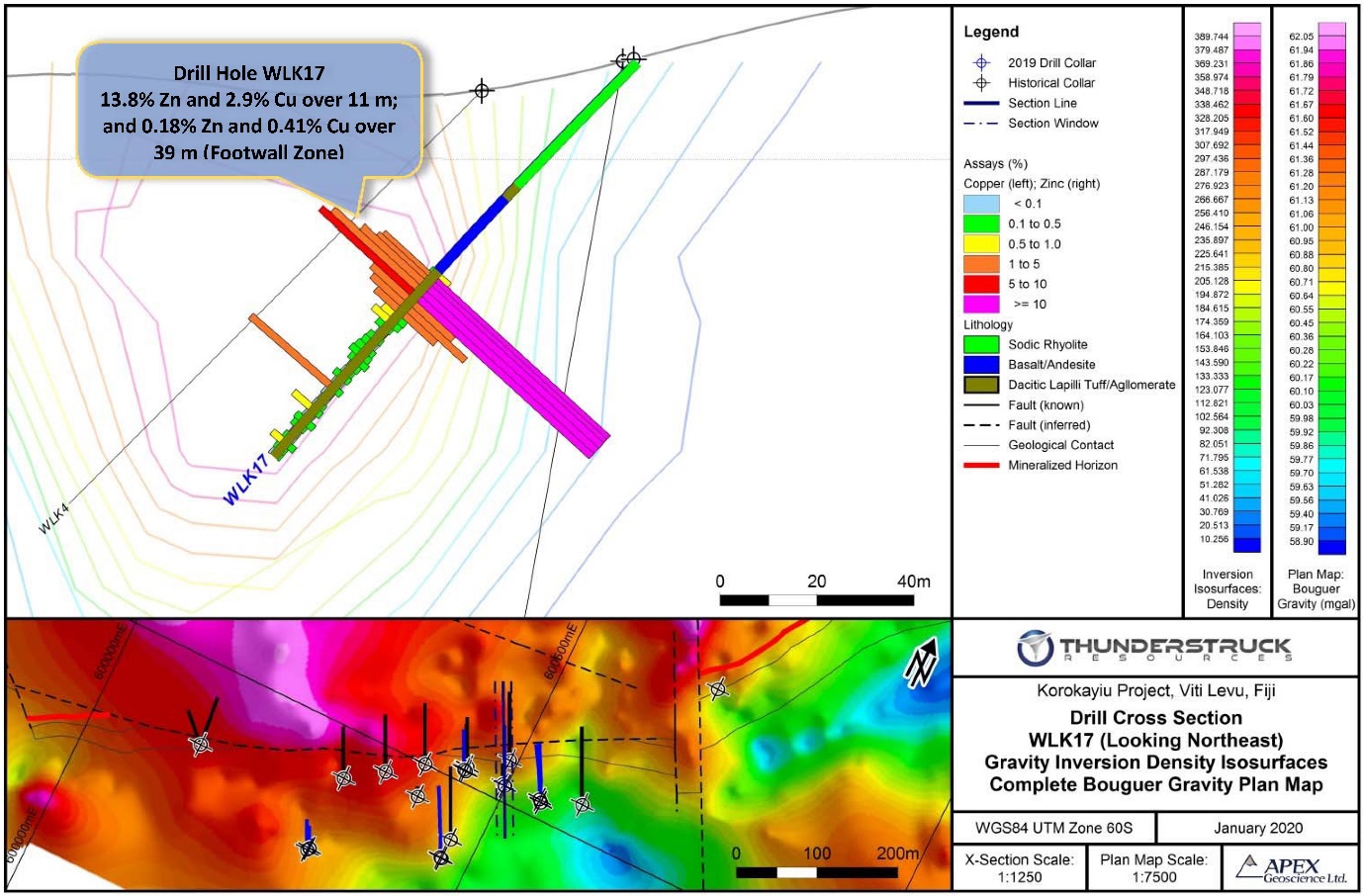 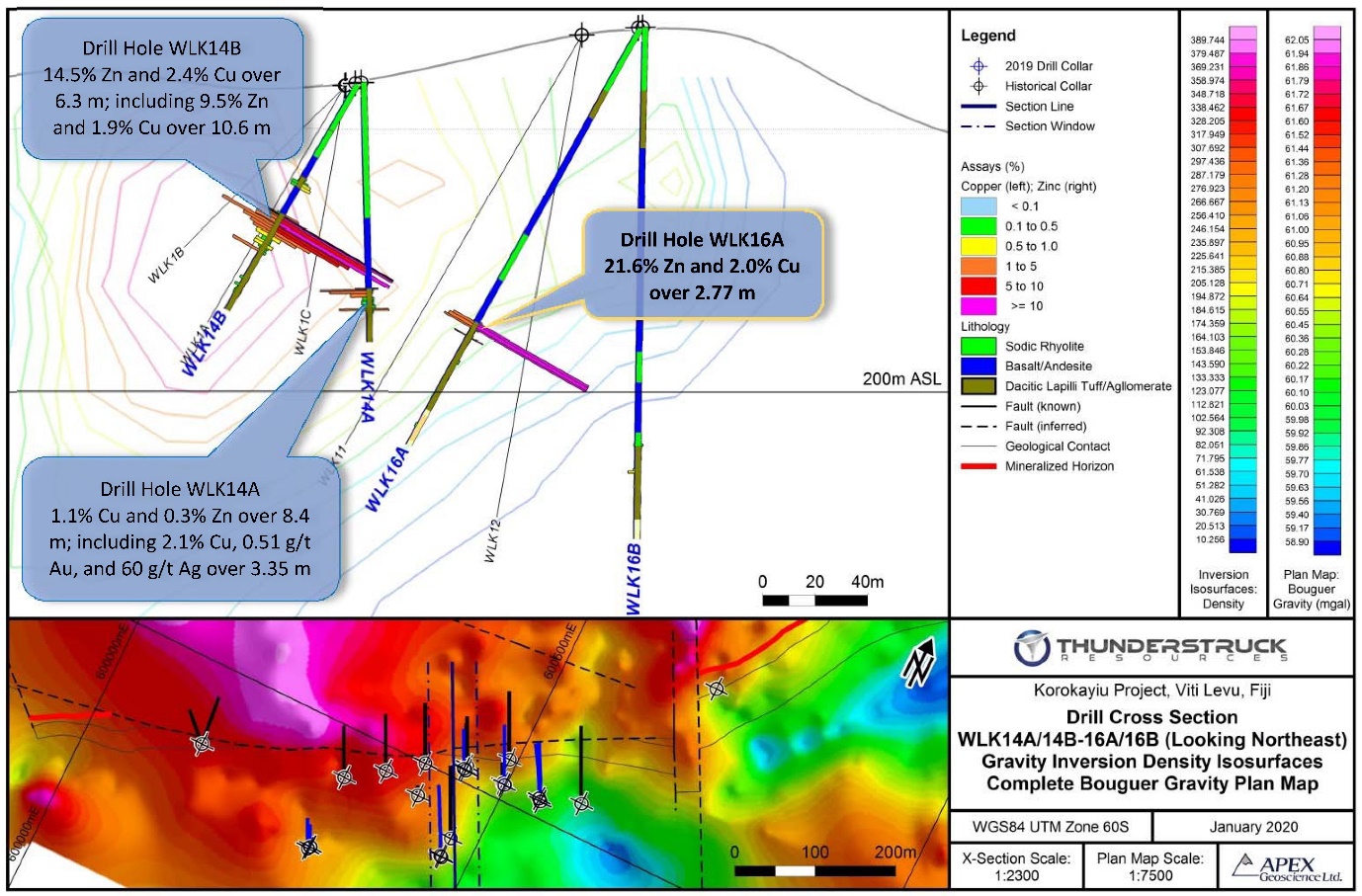 Furthering the understanding of the Korokayiu VMS prospect a geophysical survey successfully imaged the deposit with gravity anomalies having an extent of 300 x 30 m, coincident with the extent of the drilled massive zinc-copper mineralization. Subsurface gravity inversion models also reveal a 350 m strike length untested greater than 300 kg/m3 density contrast anomaly. The density high has an apparent shallow, southwest plunge extending to a vertical depth of 200 m down-dip of historical drill holes WLK-5, WLK-6 and WLK-7 at the current western limit of drilling.

In addition to delineating and highlighting areas of known subsurface mineralization, multiple density contrast gravity inversion anomalies occur along strike over a combined distance of approximately 1.4 km. These anomalies are coincident with the mapped continuation of the Korokayiu VMS prospect and are associated with anomalous historical zinc values in trench, rock, and soil samples. 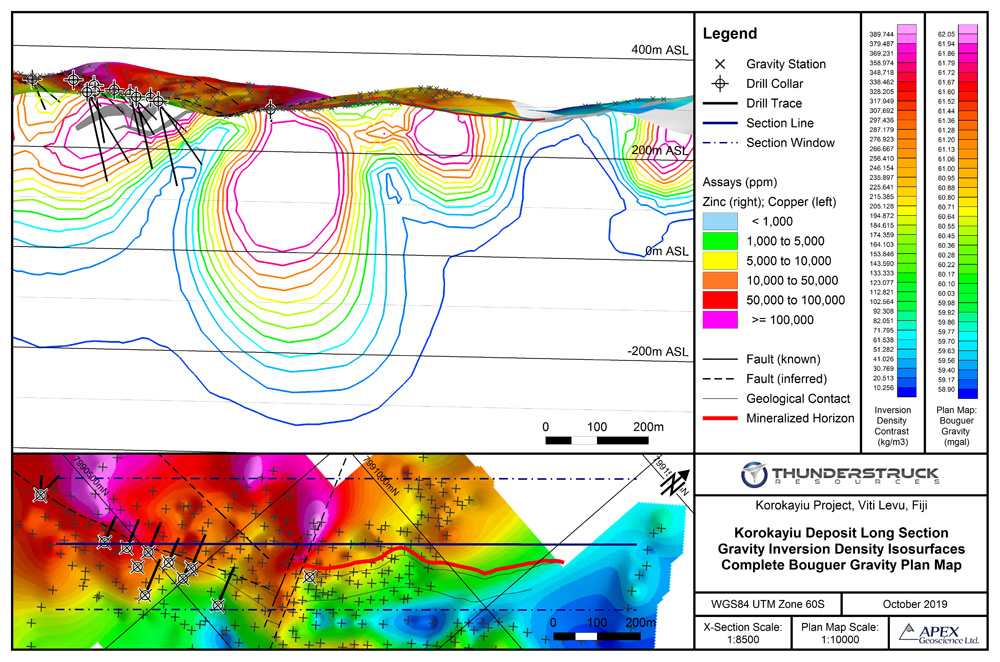