Assays are pending for samples from an additional 70 prospect pits also dug in the area, targeting both copper and zinc mineralization. The new assay information, together with past results, suggests that this copper mineralization has a lateral extent of at least 150 metres along strike and is open in all directions.

Nakoro is one of two zinc-copper projects in Fiji under option to Thunderstruck. Both the Nakoro and Wainaleka projects encompass zinc-copper discoveries revealed through drilling by Anglo American in the 1970s that Thunderstruck is now following up on through detailed, modern exploration methods.

The current exploration activities have been lodged with the Fijian Department of Natural Resources to fulfill license commitments. 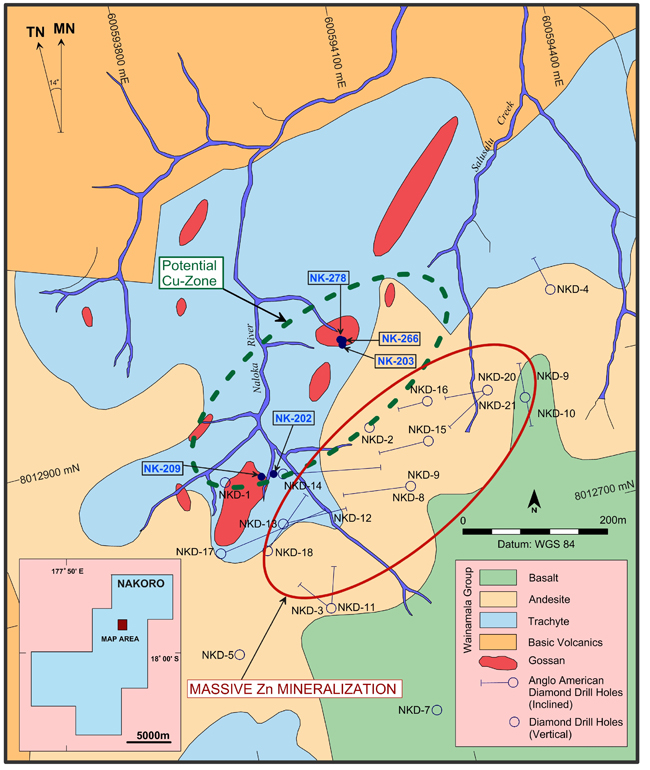 Some care must be taken with near surface sample assays, as copper, silver and zinc values can be significantly upgraded in the near surface weathering zone, as indicated by the presence of supergene copper minerals like malachite and azurite. However, there is no question the reported results are significant.

Field samples were bagged, sealed and shipped to Intertek Genalysis Laboratory Services (Genalysis), Perth, Australia, an independent, NATA accredited laboratory for copper, silver and zinc, arsenic and lead analysis. The laboratory crushed and pulverized the samples. A multi-acid digest was used including Hydrofluoric, Nitric, Perchloric and Hydrochloric acids (4AH/AA). The resultant digests were analyzed for copper, zinc, and lead by Flame Atomic Absorption Spectrometry. Silver and gold values were derived by Aqua-Regia digest followed by Graphite Furnace Atomic Absorption Spectrometry. Quality control testing of pulverizing efficiency is routinely conducted by Genalysis. International standards were inserted into sample batches by Genalysis and internal standards were used to monitor instrument drift. Blanks, splits and replicates were analysed with each batch of samples.

The information in this Press has been reviewed and approved by Michael L. Page, President of Exploration Services International, who is a Qualified Person as defined in National Instrument 43-101 Standards of Disclosure for Mineral Projects (“NI 43-101”).

The Company also reports that subsequent to a review of results from an initial exploration program, it will allow its Eric Lake Property option agreement to lapse, in order to focus more attention and resources on its Fijian assets.

For additional information, please visit the website www.thunderstruck.ca or contact: Bryce Bradley,
President, Chief Executive Officer and Director
Telephone: (604) 349-8119
Email: This email address is being protected from spambots. You need JavaScript enabled to view it.